The day after I went to Kannawa for the first time (see last post), I went on a local bus tour with one of the ALTs here and her husband. Our tour location? The Kunisaki Peninsula, an area with numerous interesting sightseeing spots and landmarks.  It’s also pretty hard to get to some places without a car, so this is a useful way to see some sights that might normally be inaccessible if you can’t drive, like me.

The tour we took was the “Rokugo Manzan” tour (literally meaning “Six Towns, Full Mountain, as the region was originally divided into 6 areas, with Mount Futago in the centre). This tour focuses on various Shinto shrines and Buddhist temples in the area.

The first stop on our tour was Usa Jingu (Usa Shrine) which I posted some photos of in my New Year’s post. This shrine was built in the 8th century and is the head shrine of thousands of shrines across Japan dedicated to Hachiman – the god of archery and war. Usa Jingu’s main hall is a designated national treasure and is the first example of the Hachiman-zukuri style of shrine architecture, in which the shrine buildings consist of two halls with connected roofs to form one building.

As well as Hachiman (the deified form of Ojin Tenno – the 15th emperor of Japan), there are two other gods enshrined at Usa Jingu; Himegami – the consort of Emperor Ojin (normally a ‘himegami‘ is part of a pair with a male kami, or god, and the pair have matching names, but in this case, although they were a pair, the names don’t match), and Empress Jingu, the original 15th ruler of Japan, who became designated as a legendary figure and so was removed from the list of emperors. Empress Jingu was the mother of Emperor Ojin.

After Usa Jingu, we went to Fukiji (Fuki Temple), the oldest wooden structure in the whole of Kyushu, with a main hall designated as a national treasure due to the large wooden statue of Amidha Buddha inside, and the scenes painted around the temple interior. Fukiji’s main hall is actually ranked as one of the top three halls in Japan dedicated to Amidha Buddha (we weren’t allowed to take photos inside though, unfortunately). 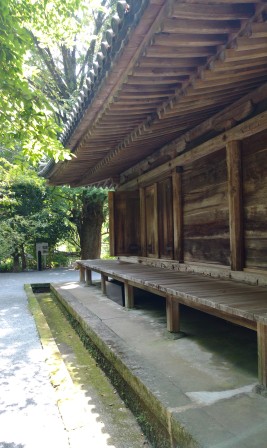 Included as part of the tour was a lunch made to resemble dishes eaten by monks living at these temples, and as such contained no fish or meat, but even so was delicious.

Once we had eaten and gained energy for what was to come, the next part was the most arduous of the whole tour – climbing up to see the Kumano Magaibutsu – two particular Buddha images carved directly into the rock face. They weren’t easy to get to though, as to reach the point where they were, we had to climb not only many stairs, but also one part that could hardly be stairs at all as it was just rocks. There is a story behind this, however. 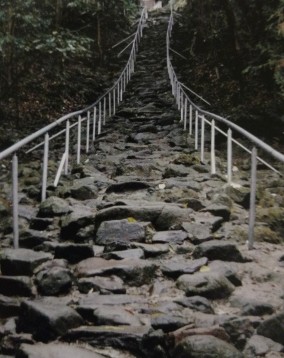 Legend states that a red ogre once lived in that area, and over time developed an urge to taste the flesh of humans. The ogre approached a deity called Gongen and begged him to grant his wish. Gongen replied “if you can make 100 stone steps in one night, your wish might come true”, so the ogre began making the stone steps early the next morning. Just before midnight, Gongen became worried and went to check the ogre’s progress. Seeing  the ogre climbing the steps with a rock for the 100th and final step, Gongen decided to make the morning come earlier, and disguised himself as a rooster, then crowed to signal the dawn of the new day. The ogre was surprised by this and ran away still carrying the last rock, in fear of being killed by Gongen.

Once you climb these steps, however, you are greeted by the two Kumano Magaibutsu carved in the rock, one at least 8 metres tall – making it one of the largest rock wall carvings in Japan. On the left is a carving of Fudo Myo-o, possibly carved by a monk in training around the 12th century, and on the right a carving of Dainichi-Nyorai assumed to have been done by a professional between the 10th and 11th centuries. At the very top of the stairs there is also a shrine to Gongen, the deity mentioned in the stone steps legend. 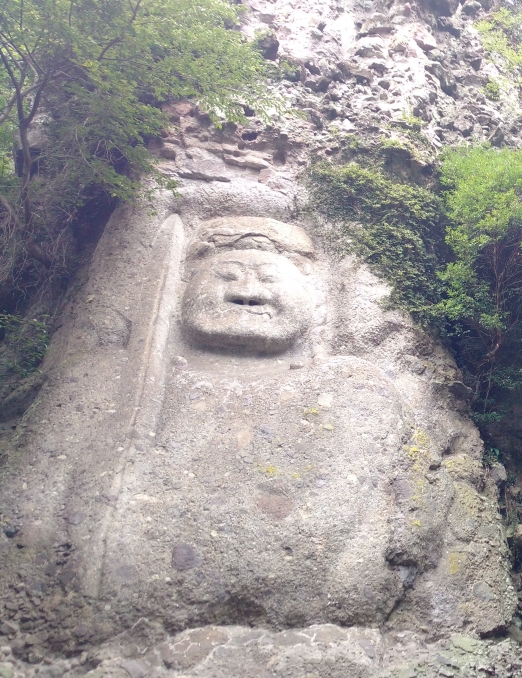 The last stop on our trip was Futagoji (Futago Temple), which, as the name suggests, is located near the peak of Mount Futago. This temple dates back about 1300 years and is surrounded by lush green forest. It has different halls dedicated to various deities, including the Gomado Hall dedicated to Fudo Myo-o, seen above, and the Okunoin Hall which enshrines Kannon Bodhisattva.

Overall this was a really interesting tour, and it was great to go to all these lesser known areas as they were nice and quiet due to their remoteness. I’d definitely recommend it~